It all started with an unlikely but extremely serendipitous coming together of people, purpose, perseverance and passion: GreenGlides birth was not easy, but it changed the industry.

Its DNA combined a Canadian, a vegan, a window cleaner, a woman and a machinist, and online forums that brought this baby into the world.

In the early 2000’s Ken Harris of Canada a carpet cleaner and inventor began to cut grooves into the flat glide that came on the PMF Easy Glide wand. He discovered that the grooves improved the airflow and dry times. Ken was tinkering in a local carpet cleaning supply store one day and saw a couple old wands in a corner. These wands, sold for a very short time by a machinist in Michigan, were dubbed GoldStar and had rounded plastic lips. They were easier to push and the rounded lips improved the dry times. Ken was further inspired by Servicemaster’s round, plastic tile attachment which was made to fit their Castex wands and had a cult following by franchise cleaners who discovered that they made the wand glide easier on carpet - although they leaked too much to afford an appreciable improvement in dry times. Ken’s quick mind put this all together and he crafted the first round, PTFE glide.

In 2003, Ken began to attempt to sell these glides, using the online carpet cleaning forums as a platform for his sales. He soon attracted the attention of Mike Pailliotet, aka “the Vegan”, a cleaner from Santa Cruz, California with a prosperous one truck cleaning company. Mike had graduated from working for Miller’s as a newlywed in his teens, to Coit, to finally becoming an owner/operator with Connoisseur Carpet Cleaning. Mike was intrigued with the infant glide, and Ken made him one for his beloved, custom Prochem Titanium wand. While it had its issues, he immediately recognized the potential. He vociferously promoted them on the industry forums.

In came the window cleaner, Jeff “Greenie” Lydon. Greenie was a veteran Marine, living in Hawaii. Greenie’s window cleaning business was doing well and, responding to demand from his customers, he had recently added carpet cleaning to his services. At the time he only offered dry cleaning methods, however he was looking to add hot water extraction to his offerings. His interest was piqued with Ken’s new glide tool and being a born salesman, he offered to distribute them on the West Coast. He was afforded a PMF 422, wand with a KenGlide, and the West Coast “distributorship”. While he only ever sold a handful of glides, they were destined to become a huge part of his life. 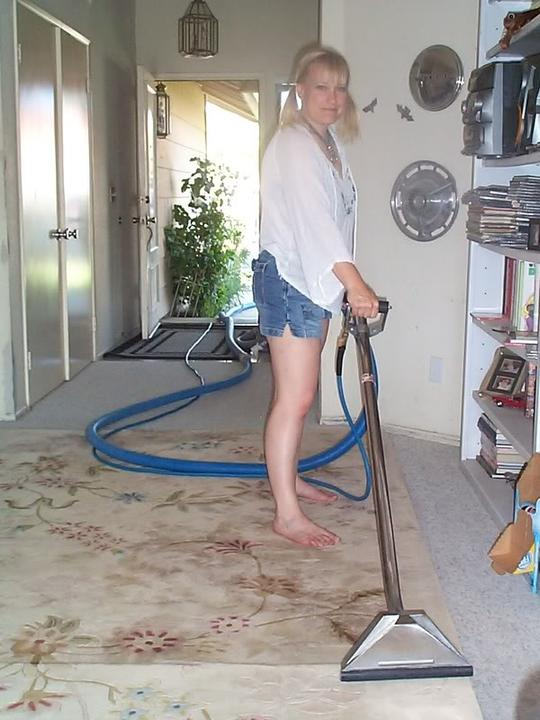 The next player was a female owner/operator from Sun City, California by the name of Lisa Smith, on the forums she was known as “Truckmountgirl”. Lisa had begun cleaning in 1987, soon after the birth of her second child. Most of the cleaning she did was repossessed homes, owned by the VA. It worked well for her as she could bring her children with her and care for them while she worked in the empty houses. Her husband had a regular job which took provided the family with insurance and benefits, and her income helped ends meet. Soon two children became four and they also became foster parents to two more. Then one day in January of 1998, Lisa’s husband died unexpectedly at the age of 39 and she was left with a very small insurance benefit, not enough to keep the family going even six months. She had to hit the ground running and support her family on her own. After considering her options, she decided to use the life insurance to put a down payment on a 16 passenger van and a truck mount and to move into the residential carpet cleaning market since the VA repo’s had nearly dried up and would not support them. Eventually, she purchased her first computer and soon found the online carpet forums. A romance blossomed between she and Greenie, and a deep friendship with Mike Pailliotet. Greenie came to California for a visit, bringing with him that PMF 422 wand and glide and gave it to Lisa. She began to put it – and Greenie - to use in her business and both became pivotal to her life story from there.

Mike, Greenie and Lisa along with other cleaners tried to help Ken fine tune his glide, but it soon became obvious that he was never going to be able to produce the consistent, quality product that the trio felt was needed. He had also attracted the attention of a very large franchise “dry chemical” carpet cleaning company that felt threatened by the drying performance glides gave hot water extraction cleaners. They definitely did not want the average HWE cleaner to be able to boast dry times as low or lower than theirs. They sent Ken a cease and desist letter, claiming glides infringed on the patent of their proprietary RX20 shoes. All of this prompted Mike to suggest that Greenie and Lisa begin making their own glides, at first they were reluctant, they had a business, a large family and neither had ever done any manufacturing. Mike persisted, and persisted and became progressively more insistent as Ken’s glide sales dwindled and it was feared glides might die on the vine before they ever really caught on. They finally agreed to give it a shot.

Greenie and Lisa set off on a quest to find a machinist to produce their glides. The first machinists they visited could not be bothered with such a small project. Eventually one suggested they try one down the street, John Fry, who they thought might be able to accommodate them. By the last quarter of 2004, Greenie and Lisa had their first ten prototype glides and sent them to Mike and other key cleaners to try. They were a hit and soon 20 more were made, all for the Prochem Titanium wand, and they brought some to Connections Trade Show in Las Vegas and demoed them on Shawn York’s Vortex and a few other truck mounts there. Soon orders began coming in and a name had to be chosen. People on the forums would often say “get a Greenie glide, they are the best” and so, as a natural evolution of that, the name GreenGlides was coined. The original GreenGlides dogtag logo was a nod to Greenie’s military service. Lisa closed her cleaning business to allow she and Greenie to fully concentrate on Greenglides. They developed three distinct interface designs – the holed, the hybrid and the slotted configurations, and through the genius of John Fry, their machinist developed glides to fit nearly every tool made. Greenie, who had an incredible knack for seeing how to improve the performance of nearly anything, added a line of high performance tools and truck mount modifications, the Greenhorn wand being one of the most popular.

Eventually Lisa and Greenie also received cease and desist letters from the Franchise, and in 2005 were sued in Utah for patent infringement. Thus began an extremely long and drawn out legal battle that lasted seven years and was famous within the industry for causing nearly every supplier and cleaner using a glide to receive their own cease and desist letters from the franchise. At the end of it, Greenie and Lisa’s marriage had dissolved. Greenie took the high performance tools, which were unencumbered by the lawsuit and Lisa kept the glide portion, and continued the lawsuit. She remarried, and her new husband was drawn into the suit as well. It was an incredibly difficult and stressful ordeal, requiring Lisa to learn patent law….making many mistakes along the way, but eventually in 2012, she prevailed and glide sales were cleared. The last hearing necessitated winning or she would have gone to jail for Contempt of Court, luckily she won.

After that, Lisa began a sanctuary home for geriatric, special needs and hospice pugs, which consumed more and more of her time and energy and also kept her close to home. No more trade shows and industry events…Now a grandparent many times over, and a breast cancer survivor, she had decided it was time to turn GreenGlides over to Mike, who had always been told that when they were ready to retire, he would be getting GreenGlides. Lisa spent 18 years as a cleaner and 15 years with GreenGlides and is ready to move on to other endeavors.

Mike has partnered up with John Olson of Superior Cleaning Solutions in Utah, who had been a loyal GreenGlides supporter and one of their first distributors. They have continued the relationship with the original machinist, John Fry, and strive to keep the quality and fit that GreenGlides has always been famous for. They also are continuing the overriding mission of Greenglides, which has always been to serve and give back to an industry that has supported and sustained them. We have plans for continuing innovation and greater support for distributors and end users. Look for GreenGlides at industry events - come by and see us. We look forward to serving you and making your life and your business better!